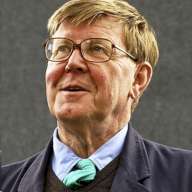 Alan Bennett - Telling Tales
Episode 1 of 10
A Strip of Blue
The much-loved writer reads his wry recollections and observations about his early life, growing up in Leeds.
Episode 2 of 10
Our War
Alan Bennett recalls his 1940s childhood. Producer of suits and rhubarb, his home city of Leeds is not a prime bombing target.
Episode 3 of 10
An Ideal Home
Alan Bennett recalls his 1940s childhood, when the sum total of family secrets amounted to not having a proper breakfast.
Episode 4 of 10
A Shy Butcher
Alan Bennett recalls his father's lot in life, plus his own childhood evenings spent cleaning his parents' false teeth
Episode 5 of 10
Days Out
The writer recalls his 1940s childhood and the difficulties he and his parents faced in leaving Leeds on wartime Sundays.
Episode 6 of 10
Proper Names
The writer reminisces about his 1940s Leeds childhood, and the time his father was taken seriously ill.
Episode 7 of 10
Eating Out
The writer recalls the menu revolution of 1950s Britain, which saw the arrival of frothy coffee and cocktail parties.
Episode 8 of 10
Aunt Eveline
The writer shares post-war memories of his relatives. They may not have been colourful, but they were definitely eccentric.
Episode 9 of 10
Unsaid Prayers
Scared of infection from the communion chalice, the writer recalls his Anglican faith throughout army and university life.
Episode 10 of 10
No Mean City
The writer concludes his reminiscences of post-war Leeds, and describes the hold it's always maintained on him into adulthood.